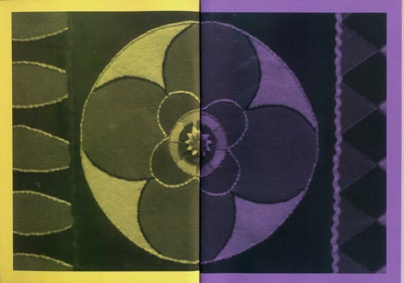 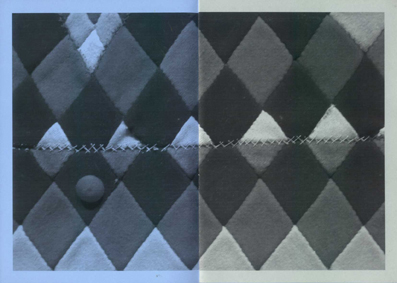 These extraordinary textiles, all made by men, demonstrate that some beauty can come out of the horrors of war … The red coat of the British soldier, formally adopted in 1645, formed an integral part of his identity … A military hierarchy was strictly enforced through the type of dye used and the resulting brilliance and purity of the color. Uniforms worn by infantry … were dyed with inexpensive madder … Non-commissioned officers … were permitted to wear an intermediate “mock scarlet,” … whereas officers wore coatees colored scarlet with the most expensive cochineal dyes. … the uniform facings of collars and cuffs were dyed in the regimental colors, including black, blue, buff, green, yellow, white, and sometimes even orange or purple. … The majority of quilts in this exhibition were pieced from milled wool broadcloth, used in the production of British military and ceremonial uniforms … The cloth was further … felted to produce a raised nap. The byproduct of this … was the ability for the cloth to be cut without fraying, a characteristic that allowed soldiers and military tailors to create fantastically complex piecework without bulky seam allowances and to hide the overstitches in the nap … Although regimental tailors were assigned to each unit and may have made quilts, soldiers were encouraged to attain some level of skill with a needle and thread in order to maintain their kits … For the British soldier, the situation in India … posed its own challenge in filling time in a manner that was not destructive or unsavory … The extreme heat, as well as the stress of inactivity in a foreign land, took a tremendous physical and psychological toll. In response to the lassitude imposed by inactivity, the government offered industrial exhibitions and professional workshops by the 1860s, often with prizes awarded for a variety of skills including needlework … the promotion of the soldier-quiltmaker was part of a calculated campaign throughout the United Kingdom to rehabilitate public opinion about the careless administration of the [Crimean] war … [In India r]aw materials were more readily at hand than in a combat situation, and a greater variety of colorful woolens in addition to regimental colors might be available from established tailoring shops … [The quilts] are often constructed in the inlaid technique … so they are virtually identical on the front and back. The patterns are … complex with intricate blocks of stars, compasses … interspersed among the more usual and less demanding geometric piecework … what really sets quilts made in India apart are the masterful technique [and] attention to detail … [s]urface embellishments might include glass beads and spangles, or … the tiny discs of fabric ejected as buttonholes were pierced into woolens during the tailoring process … Because of the high degree of skill evident in these quilts, it is thought that the majority may be the work of professional regimental or Indian tailors.

The images were photographed in the exhibition War and Pieced: The Annette Gero Collection of Quilts from Military Fabrics at the American Folk Art Museum, December 2017.